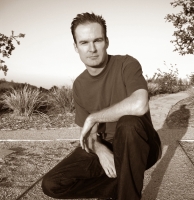 Q, aka the extraordinarily prolific Timothy Wiles, has dedicated his life to the production of forward-thinking music. Under the moniker Überzone, he was renowned as one of the biggest names in the American electronic dance scene through the turn of the century. He’s since gone on to lend his phenomenal talents to mix and produce some of the most innovative artists around in the shape of Steve Angello, Sebastian Ingrosso, A-Trak, Alex Metric, Factory Floor and Liars.

Q can currently be found doing what he does best; collaborating with other artists to create great art. 2016 will unveil his work on hot newcomer Ten FE’s debut album, and he’s also just finished mixing a Jagz Kooner remix of a Primal Scream track and hottly tipped Belgium electro act Bazart's new album.

Growing up in Fullerton, California, it was Wiles’ passion for tinkering with electronic gadgets that landed him the nickname Q (in reference to the character in the Bond franchise) before even stepping behind the decks.

Cutting his teeth at early raves, Q’s Überzone took the scene by storm with the release of his debut EP “Botz” (1995). After following that up with the “Space Kadet” EP (1996) and the pounding beats of The Freaks (1997), his collab with Afrika Bambaataa on the electro-breaks anthem “2Kool4School” elevated him to the status of fellow big hitters at the time: The Chemical Brothers, The Prodigy and The Crystal Method. The remix work came flooding in: BT and The Crystal Method, followed in later years by Depeche Mode, Erasure and Major Lazer.

In 2001, he released Überzone’s debut album “Faith In The Future” on Astralwerks. It’s an album radiating with Q’s distinctive individuality: sci-fi film soundtracks interwoven alongside wall-rattling breakbeats. It was quickly followed up with two mix albums, and his second studio album “Ideology” emerged in 2007 to similar acclaim.

During this time, Q toured the world slaying crowds with Überzone’s unique blend of “bass, beats & blips.” As a live performer, he lit up crowds across the globe playing at major festivals, including Coachella, Electric Daisy Carnival, Nocturnal Festival, Ultra, Glastonbury and Glade

Q’s experience as Überzone laid the foundation for his mastery of the studio environment. His love of the studio is what ultimately prompted his natural transition to refocus his career by working with other artists.

One of the artists Q has worked with most closely and consistently as a mix engineer is fellow Big Life artist Alex Metric. For Metric’s 2011 debut album “Open Your Eyes,” Q mixed the title track featuring Ian Brown as well as the standout “End of the World,” featuring Charli XCX. Over the years Q has proved himself as an important cog in Metric’s machine going on to mixing all four of his “Ammunition” EPs, the “Hope” EP and countless singles. Most recently, Q added his touch to Metric’s “Cahuenga” which featured on OWSLA’s Spring Compilation 2015.

Superstar DJ and former member of Swedish House Mafia Steve Angello has also entrusted his solo work to Q. His first project was to mix Angello’s solo comeback “Yeah,” while Angello again called on Q’s mixing expertise when he worked with his follow-up track “Lights” – a track so big that Pete Tong premiered it twice on Radio 1.

When Angello teamed up with AN21 and Max Vangeli for “H8RS,” the first track from their duo’s debut album “People of the Night,” Q was asked to mix and master the rest of their album. Word of Q’s skills soon reached Angello’s former SHM colleague Sebastian Ingrosso, who tapped Q to mix his smash “Calling (Lose My Mind).”

Another DJ heavyweight sharing his beats with Q is the prolific A-Trak. In 2014, Q mixed his massive house track “Push,” which Stereogum heralded as “a beautifully absurd piece of work.” A-Trak got Q back in the studio again in 2015 to mix “We All Fall Down” which had received a global premiere courtesy of Zane Lowe at Beats 1.

Empire of the Sun and Tommy Trash, two of Australia’s biggest music exports, joined forces to help raise awareness for the (RED) Global Fund to fight AIDS and Q was on hand. He mixed “Celebrate,” a synth-charged banger and an immediate highlight of the Dance (RED) Save Lives, Vol. 2 compilation.

When Vince Clarke and Depeche Mode’s Martin Gore reunited for the first time in 30 years, they were looking for the perfect mix engineer to collaborate with on their project VCMG. Q was selected to mix VCMG’s critically-lauded 2012 album “SSSS.” Around the same time, Q mixed some additional tracks for Erasure’s 2011 album “Tomorrow’s World.” It’s a relationship that endured as Q reunited with Martin Gore to provide remix duties as Überzone for Depeche Mode’s track “Should Be Higher” from their 2013 album “Delta Machine.”

However, Q’s talents have not stayed within the confines of the dance music scene. In 2013 he mixed the self-titled debut album from post-industrial band Factory Floor. A year later, avant-garde noise provocateurs Liars called upon him to mix their album “Mess.” Shortly after, Q lent his mixing and mastering expertise to the debut album by HeCTA, the experimental electronic side-project of Lambchop leader Kurt Wagner, all while in the midst of mix and additional production on The Gromble’s forthcoming debut album.

Last year saw Q reunite with Martin Gore to mix his second solo album “MG,” as he also took on mixing responsibilities for Yacht to help refine the LA-based duo’s album “I Thought The Future Would Be Cooler.”

As well as being a gifted mixer, Q has proven himself as a skillful mastering engineer. He’s mastered for regular collaborators Metric, Gore and Ingrosso, plus Tommy Trash, Pretty Lights, Odesza and Borahm Lee.

It’s an exciting world of opportunities for Q right now, but one that has been born from decades in the field. If you’re in need of an exemplary mixing job, this man should be at the head of the Q.