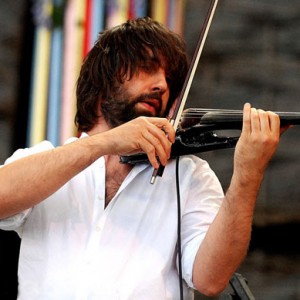 A multiple Grammy Award winner, Davide Rossi is one of the most innovative orchestral arrangers of the current era. His work can be heard on albums from an eclectic array of artists such as Ed Sheeran, U2, James Bay, Kayne West, Frank Ocean, David Guetta, Sigrid, Goldfrapp, The Verve, Dido, Röyksopp, Alicia Keys, One Direction, John Mayer,  Moby and Jon Hopkins . Davide is most well known for his long standing creative collaboration with Coldplay, including the two opening tracks, ‘Sunrise’ and ‘Church’  on their most recent album ‘Everyday Life.’

What makes Davide so unique, is his ability to play every string instrument. As a classically trained violin, viola and cello player, his finely honed technique of recording himself polyphonically means it’s not necessary to hire an external string orchestra. He is a one man string orchestra! Listen to the worldwide Coldplay smash “Viva La Vida” as a perfect example of Davide’s unique sound and technique.

Rossi picked up the violin as a young child, and went on to earn his classical Diploma and Masters at the Conservatory “G.Verdi” in Milan. He continued his education at Bath Spa University College, gaining a BA in Composition followed by an MSC in Digital Music Technology at the University of Keele.

Alongside his formal classical studies, Rossi furthered his education through an intensive Guitar Craft course taught by King Crimson‘s guitarist, Robert Fripp followed by tutelage with ground-breaking German composer Karlheinz Stockhausen. These mentors have been hugely influential in shaping his musical career.

Studies complete for now, Davide’s life was about to take a massive turn when he was invited by Will Gregory to join Goldfrapp where he became an integral part of the band’s live incarnations and musical output, touring the world at the height of the band’s success.

It was during Goldfrapp’s European tour of 2006 that Rossi met Coldplay. As soon as they began working together, it became apparent that Rossi’s input would be hugely influential.  For over a decade, Davide has arranged and orchestrated tracks across all the band’s albums, including the stunning Paradise, Every Teardrop Is a Waterfall, True Love and of course huge global smash Viva La Vida, which became the band’s first UK and US #1 single. His work with Coldplay led Davide to his earning two Grammy Awards.

After leaving Goldfrapp Davide consolidated his reputation as truly creative string arranger, with classical expertise but on a alternative tip. He began collaborating with Danish electronic producer Trentemøller, and wrote orchestral arrangements on multiple tracks for Röyksopp‘s award winning albums , Junior and Senior. Moby soon called and he arranged and performed strings on his album “Wait For Me”, followed by working with Depeche Mode’s Alan Wilder to rework “5000 Years (A Romanian Elegy For Strings)”

He didn’t abandon his rock ‘n’ roll roots though and joined the Verve briefly for their comeback tour, both as live string performer but also wrote arrangements for multiple tracks on the band’s Number 1 LP Forth. Headlining Glastonbury with the band was a defining moment in his career.

Rossi started working with fellow Coldplay collaborator, Jon Hopkins, on his critically acclaimed solo album, “Insides.” The duo’s connection continued with soundtrack work for the films, “Monsters,” which was nominated for an Ivor Novello Award for Best Original Score, and “How I Live Now,” and both supported Coldplay on the Japanese leg of the “Viva La Vida” arena tour.

In 2014 Davide went on to win his third Grammy with string arrangements with Alicia’s Keys for Best R&B Album for her all-conquering “Girl On Fire.” Most recently Davide has been collaborating with other artists in the urban space, including multiple arrangements for Frank Ocean as well as Kanye West.

Other collaborations of note include working with Rick Rubin on Ed Sheeran’s X LP including monster hit “Photograph” arrangements for Bat For Lashes, Twin Atlantic, Chris Cornell, Regina Spektor and James Bay, Sigrid and has very recently spent time in the studio playing cello with Beck.

A final string to Davide’s bow is his work as conductor on numerous projects. In 2014 He was asked to compose and conduct an orchestral interpretation of Culture Club’s 1983 album “Colour by Numbers” for an exclusive BBC Radio 2 session. The album was performed in full with the BBC Philharmonic Orchestra.

This performance was heard by Australian act Flight Facilities, who then personally invited Rossi to arrange and conduct their performance at the 2015 Melbourne Festival. Rossi’s task was to interpret their contemporary club sounds for the eighty-piece Melbourne Philharmonic Orchestra. This resulted in the release of the critically reimagined Down to Earth LP which went on to win Davide his first ARIA award when the band scooped the top prize for contemporary classical record in 2016.

Another career highlight came when Rossi helped Coldplay with their Super Bowl Half-Time show, scoring arrangements for the YOLA string orchestra, conducted by Gustavo Dudamel and the University of California Marching Band of Berkeley. He was involved not only in the process of scoring the arrangements which were included in Coldplay’s Medley (Viva La Vida/Paradise/Fix You etc…) but also in coordinating recordings and coaching for the two orchestras until the actual performance, which took place in Santa Clara, California.

Davide continues to grow as an artist; he worked heavily on the brand new Jack Savoretti album released March 2019, which reached #1 on the UK charts along with working on new Coldplay material as well. You can hear his beautiful string arrangement on the current George Ezra single, ‘Hold My Girl.’

On top of his dynamic and powerful production and arrangements for an array of talent, Davide has also been doing a lot of co-writting, which can be heard in four of Imelda May’s tracks on her forthcoming album.

Orchestration can completely change the perception of individual pieces of music and Davide Rossi’s evocative string arrangements add a whole new layer of emotion and atmosphere.