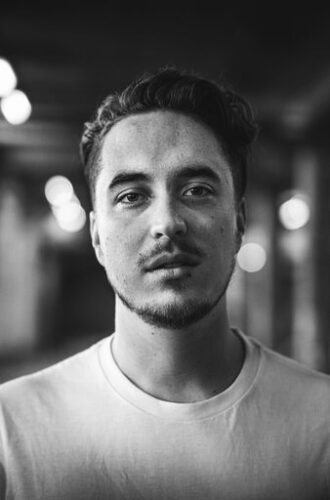 Ben Jackson Cook has arrived! 2021 will be the year that this young, super talented writer/producer becomes known across the music business and beyond. Having cowritten and coproduced the forthcoming Rag’n’bone Man album ‘Life By Misadventure’ and recently signing a global publishing agreement with Sony Music, we are excited to watch his career flourish.

Ben discovered his passion for music at a young age, playing piano and guitar from his teens. Knowing a future in production and song writing was his calling, he talked himself into a position of teaboy at the legendary Olympic Studios in Barnes. Working with some of the biggest names in music production (Spike, Youth, Dave Bascombe), he started honing his skills in sessions with artists of the calibre of The Coral and Richard Ashcroft. Knowing he needed to learn as much as possible, Ben enrolled at the University of Bath studying for a degree in commercial music.

On graduation, Ben spent a few years building up a reputation as band member and then musical director, MDing for Foxes, Ella Eyre and Kelvin Jones. However it was when he was introduced to Rory Graham AKA Rag’n’Bone Man in 2015 that his life took a fantastic turn. Again hired as MD to pull the live show together for what would become the globally successful ‘Human’, campaign, over 2017 and 2018 they played some of the most prestigious festivals in the world including Montreux Jazz Festival, Glastonbury, Fuji Rock, North Sea Jazz, Osheaga and Bonaroo.

Whilst on the road, the pair naturally starting writing together. Their first collaboration ‘George Has Got A Friend’ was released for Record Store Day in 2018 and available only on vinyl. Realising they had a special musical connection, Ben and Rory continued writing songs and headed to Nashville to collaborate with Jamie Lidell and a host of incredible writers and musicians – Natalie Hemby, Wendy Melvoin and Daru Jones. The result was ‘Life By Misadventure’ and so strong were the writing demos that when legendary producer Mike Elizondo was bought in to guide the production process, Ben production ideas were kept and a coproduction credit was agreed.

Fast forward to the beginning of 2021 and Ben has recently concluded a highly competitive global publishing agreement with Sony. While still very much a part of the Rag’n’Bone story, he is currently focused on cowriting and is currently working with some of the most promising emerging UK talent such as Tom Grennan, Lucy Rose, George Cosby, Lilla Vargen and Mitch Sanders.